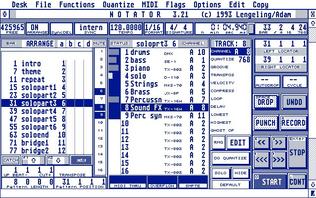 Other than the TX16W sampler, this was the “brains” of T4M for the duration of the most active period of the band, from 1991 to 1995. With a comparatively (to the QX-21) whopping potential for up to 32 MIDI tracks, an intuitive graphic interface, an honest-to-goodness mouse control, and for our purposes UNLIMITED MIDI event memory, Creator was a significant leap as a compositional tool. Prior to the integration of software multi-track digital audio workstations (DAWs), it was the absolute go-to program for sequencing. One of the first things I did was transfer files from the QX-21 into Creator and - get this – save them to floppy disk. I never looked back. To this day, both Gabriel and I still compare the effectiveness of contemporary DAW MIDI sequencing environments to Creator. Many of them are very effective and probably better, but subjectively lacking in the magic.

A point of dubious interest, the file names needed to be 8 characters or less, so working song titles tended to be very short, most of which became the final titles on the CD.