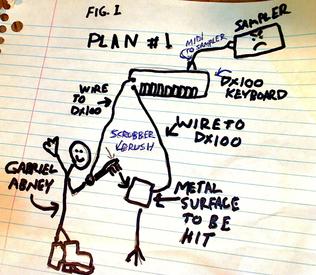 Worthy of note regarding our early shows were our attempts to figure out how to play drums live.

The fundamental issue was that by the time 1993 rolled around, we were pretty much flat broke, and were not yet reaping the huge financial rewards that I assume (at the time of this writing in 2014) are still just around the corner. The drum controller pads and “brains” (pad-to-MIDI converters) were too expensive for us that this point, but I, with my awkward experience in electronics, had some big cost-saving plans.

My first plan was to rip about five keys off of my Yamaha DX100 keyboard, and run two wires out from the contacts where the keys connected to trigger sounds. When I touched the two wires together, a sound would play AND more importantly, a MIDI signal could be sent to our sampler, triggering a drum sound. So far so good…

The next stage was to solder one wire onto a metal plate on our drum stand, and another wire onto a metal striker. When the striker hit the pad - boom, you got a drum sound. Through experimentation, I discovered that the most effective and consistently reliable item to use as a striker was a barbecue scrubber brush. See fig. 1.

The only major problem with it was that Gabriel thought he looked like a fucking tool standing onstage with barbeque scrubbers in his hands. We argued, but there was no convincing him. Curiously enough, quite recently I saw a documentary where seminal electronic band Kraftwerk used the same sort of concept in drum triggering, except that they used something far more masculine and impressive as strikers - knitting needles. Good enough for Kraftwerk, but, oh no…not for Mr. Gabriel Abney. Hey, the only thing Kraftwerk did was INVENT the paradigm of modern electronic music. Why listen to them?

After Gabriel nixed the first plan, we ended up borrowing somebody’s tiny little drum controller –the Yamaha DD-12, which offered the salvation of having a MIDI out on it so we could send it to our sampler. The down side to the DD-12 was that it was more likely designed to be played by a child, or an infirmed tiny baby of a person, and not by the violent brute force of a synthetically enhanced Gabriel Abney. There MIGHT have been one functioning pad after the second gig.

One the plus side, the guts of the device still worked, and I was able to create these weird trigger pads from piezo elements (little metal plates that covert voltage to vibration and vice-versa, used commonly in telephone ringers and alarm clocks), wrapped up in hard foam. These sort of worked…sort of. Once again, the cruel bludgeoning might of Mr. Abney was too much for the delicate foam pads and telephone ringers. Truth be told, I helped break them.

Eventually, Andrew Amy from Factoria took pity on us and purchased some real drum triggers, which he would let us borrow and use, with his supervision.

In retrospect, live gigs seemed to involve things getting broken.