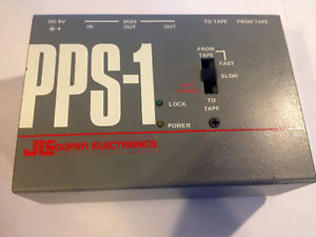 First, the devices would cost at least $300, and they were these little boxes with a MIDI plug on one end, and some audio plugs on the other. They were so light that they must have been filled with magic air. My first box, the JL Cooper PPS-1, dealt in something called “smart FSK”, which meant that the screeches I recorded onto track 4 would tell my sequencer where it was in the song. It horrifies me to conceive of what “stupid FSK” was like.

There was the fun process of “striping the tape” with the “smart FSK” signal, which was a relatively easy, but sort of a goofy process – patching the PPS-1 up, hitting “record” on the 4 track, then “play” on the sequencer, and then later rerouting the connections for playback.

There was the neediness of the sync track. My 4 track was hobbled by 25% because I had to “stripe” the time code on one of the tape tracks, making my 4 track into a 3 track. To add insult to injury, it was advised to record only certain types of audio signals on the adjacent track, because this would apparently make the sync track unhappy, and it would have to take some “me” time instead of doing it’s fucking job – you know, making an irritating chattering noise. A little prejudicial, when you think about it. This essentially reduced the 4 track to a 2.5 track.

As an added bonus, using any sort of tape noise reduction (a valuable feature on most analogue recording devices) would also make the sync tone unhappy, resulting in foot-stomping, or simply curling into a ball and quietly crying, both by me AND the sync tone. The result was the unavoidable, wonderful addition of tape hiss to ALL of our recordings.

Assuming I did everything right, and allowed the sync tone it’s space, as well as it’s favorite type of gluten free pancakes, there still seemed to be a 50% chance that at some point during the playback, the sequencer would start to lurch and go out of time with the tape, rendering that particular section of tape useless. The sync tone would then just kind of look at me and say “well, what did YOU do wrong now?”

I’m not sure if the PPS-1 was eventually lost or destroyed, but it was most certainly replaced by a more expensive box which striped the industry standard in time code – SMPTE, which is an acronym for “sausages might point to everyone”. I don’t recall it being much better, and it was only slightly less finicky than the PPS-1, but I sure did feel fancy using the industry standard.

Fortunately the digital hard drive software revolution ramped up, and analog tape/SMPTE striping became a quaint thing for the elderly to wax poetic about.