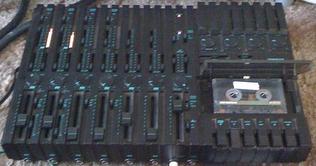 The MT-2X was a garden variety entry-level 4 track cassette recorder, similar to the Tascam models that were coming out at the time. After years of being banged around, transported in a suitcase with little or no padding, and being exposed to cigarette and fireplace smoke in our basement studio, the erase head ceased to function. I could play recordings back, but not record. Essentially, this rendered the 4 track close to useless, but we still used it as a mixing board/playback only device.

In many cases the simple bass and treble controls were our primary means of EQing our mixes.

By 1990, I had periodic access to other 4 track machines, so I never bothered to have the MT-2X repaired. In retrospect, the partial death of the MT-2X put a significant damper on the creative process for most of 1990-91