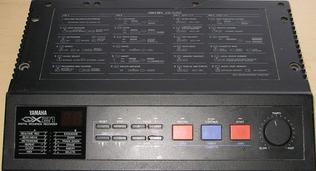 This was my core sequencer from 1987 to 1991. With 2 tracks and about a 6000 midi event memory, it could barely hold enough MIDI information for a complete song. Similar to the DX100, song data could be stored onto cassette tape, a silly and often unreliable means of archiving songs. Many good (and not-so-good) ideas vanished into the limbo of corrupt data. My lack of musical skill, and the simplicity of the device lent well to writing repetitive patterns and relatively mechanical sounding music. After 4 years of working with it, that became a fundamental aspect of the way I put music together.