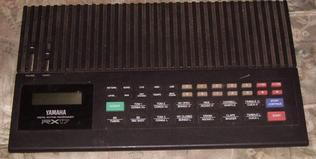 In terms of songwriting, this drum machine bridged a gap prior to the purchase of the TX16W sampler in 1989. Besides finally having access to drum sounds, this was the first device I worked with which was, as a default, pattern based (as opposed to linear) much like Creator, the computer sequencing program we later used on most of our material. Also similar to later sequencing programs, it had a “piano roll” screen where midi notes could be visualized and altered. This sort of stuff was really impressive after using the two character LED screen on the QX-21. In terms of visualizing and editing MIDI notes, this piano roll environment has remained the standard on most MIDI sequencing programs right up to the present day.

I wouldn’t say I was ever in love with the sounds on the RX-17, but it was at the very least, an education. The limitations and the dullness of the preset drum sounds did result in some improvisation, and I got some decent results by distorting the drums once in a while. ►Drums from "Fixture"