The TX16W was a significant purchase at the time (about $1800), but well worth the price in terms of bang for the buck. Suddenly being able to trigger and play up to 16 samples simultaneously really opened up options in terms of song composition. It was incredibly useful. 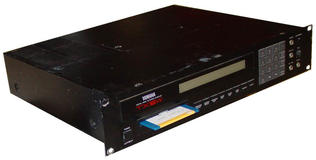 Compared to the more expensive and more commonly used Akai S900, the 16W was capable of playing more sounds at a higher resolution for less money.

One of the down sides (of which I was blissfully ignorant) was that the user interface was notoriously difficult to use. Arranging and editing sounds could be quite time consuming, and often required the swapping of disks to access other editing parameters. Another issue was that the entire operating system was floppy disk based, meaning that if you didn’t have the system disks or the back up copies, the unit was a big stupid paperweight.

Compared to the software samplers of today, it’s a clunker, but in terms of assembling songs for the CD, it was integral. It was also very solidly designed – I treated it pretty roughly, dragging it around with me for nearly a decade, yet it continued to function without a need for repairs from 1989 well into 2001. Actually, it may still be working, wherever it is now. Salud, old friend.