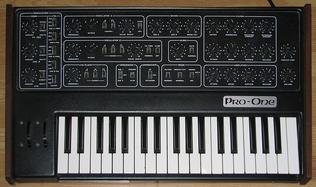 Ogre lent this synth to Gabriel, and in retrospect, I have no idea why I didn’t use it - possibly because anything that didn’t have a MIDI plug on it was dead to me, but I was a great fool. Had I had any sense, we could have cooked up tons of good sounds on it, and then sampled them.

I’ll leave the overview to Gabriel.

@Gbrl says: "This was a brilliant machine. It was the kind of synthesis that I was actually comfortable with . A lot of the percussive sounds on 'Plague' were actually synthesized and sampled from the Pro One. Probably bass sounds are what we should have used it for more, but those were different times... actually there's no excuse, we should have used it for more bass sounds, period.

The only problem was this particular one had a problem with the keys. No idea why, but they worked intermittently, and never had very good feel. Still, would cheerfully kill to have one now."